We’re here in Costa Rica!  We arrived a little over a week ago and so much has already happened.  It honestly feels like we’ve been here for a month.  When we arrived at the airport here, it took us FOREVER to get through immigration.  When you have three kids, any wait in line longer than 30 minutes is torture.  As we were about 3/4 of the way through the LONG line and an hour had already passed, Maria started to have a major meltdown.  You know, the kind where she’s lying on the floor kicking and won’t get up.  But this turned out to be a good thing because one of the security officers asked us to follow him and he put us in a special line.  I think the line was for handicapped and occasionally for screaming children.  Excelente!  Que bueno!  Our immigration officer really liked the kids and let us through lickety split.  Next up was baggage claim.  We packed all of our stuff in four Home Depot carboard moving boxes.  We should have gone with UHaul boxes because there is a difference in quality (note to self).  We had virtually zero confidence that our boxes would make it in one piece.  We pictured our boxes breaking open and our clothes and other items being strewn about on the baggage claim turnstyle going round and round.  When we got to baggage claim, our boxes were tattered and hanging on by a thread but they made it.  Phew!  That was a close one.

Next up was customs and I started talking with the customs agent.  He told me that I picked the craziest day to arrive in San Jose because the Costa Rican futbol (soccer team) was flying back from Brazil and would land in less than an hour.  Then he asked me if I realized the main highway and many of the streets were shut down because there was a parade scheduled for the futbol team.  I told him, “Gracias por la informacion.”  Then I turned to Marc and said “Good golly, I think it’s going to be crazy outside.”  And it was…

There were people blowing air horns, ringing cow bells, and blowing kazoos all along the highway.  We went on many side streets, got a little lost, and ended up making a loop back to the airport.  But it was perfect timing because the futbol team’s airplane flew right overhead making their landing and the crowd went wild.  You could feel the pride of Costa Rica in the air.  It was really neat to witness and Joellen joked that it was nice of all the Ticos to show up for our arrival.  From the airport, it should have been a quick 25 minute trip west to Atenas, the town we live in.  It took much longer but we loved it, watching all the people along the way.  We saw everything from a newborn baby being held in one arm while the dad waved the Costa Rican flag in the other, to a woman that honestly looked over age 100.

When we got to Atenas we were supposed to meet the man we are renting our house from.  Well, there was a communication mix up and long story short we were two blocks away from each other in town but we could not find one another.  After an hour of waiting we decided to drive to where we thought we saw a sign for a bed and breakfast because it was getting towards evening and the kids were tired.  We could not find the sign but we did find a bar with a wifi sign.  We needed wifi and Marc needed a beer.  We pulled in and Marc ordered a cerveza and logged onto his computer to send the homeowner an email (because he was not answering his phone).  Meanwhile, I started talking in Spanish with a local, Aaron, who said his friend lives in the same neighborhood where we are renting.  We would not have been able to find our neighborhood because there are no street names, addresses, or street signs in Costa Rica.  Someone’s address looks something like this…75 meters west of the blue mechanic shop behind the white church on the hill.  There was no plugging our address into our Garmin.  Luckily Aaron knew the vicinity and we followed him and he led us directly to the house and the homeowner had just gotten there.  So it all worked out and we thanked our new friend Aaron.

Our homeowner showed us around and the kids were most excited about the fruit trees in our yard.  We have mostly banana, mango, and lime trees.  The kids went nuts and picked almost 15 limes the first night.  Time to make mojitos!

The next day we went grocery shopping, picked more fruit, and headed over to the orphanage to meet Cherie and the kids.  From the instant we met Cherie and she gave us a big hug, we knew we were in the right place.  We found out about Cherie and her orphanage, Residencia de Vida, through a mutual friend.  The plan is for us to help Cherie with the organization as it goes through some big changes and to teach the kids English, do art projects, and conduct fun science experiments.  We will also help with chores when needed like laundry and cleaning.  But most importantly we are here to simply love the children at Residencia de Vida.  Our 3 kids really enjoyed their time at the orphanage this week.  Joellen was shy but hopes to become good friends with Nay, one of the girls that is her age.  And Camden immediately hit it off with Jack, who is his age.  Even though there is a language barrier, the language of chase and rough housing is universal.  I will write more on Cherie and her orphanage in future posts.  For the safety of the children at the orphanage and by government law, we are not allowed to share online any close up photos of their faces.

Here are some fun photos when we visited the home of our new friends John and Jill.  John, Jill and their two teenage daughters are from Minnesota but now permanently live in Costa Rica.  They also volunteer at Residencia de Vida.  The home they rent is on an organic coffee farm high up a mountain.  Camden and I are crazy mango fans and John and Jill have a fruit picker which makes picking mangoes so much easier.  At our house the kids have to climb on Marc’s shoulders. 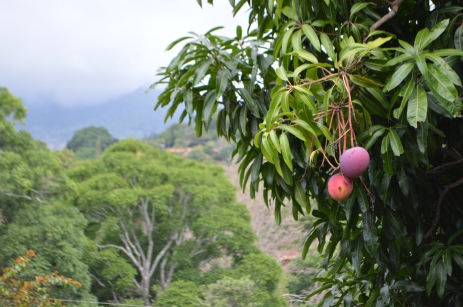 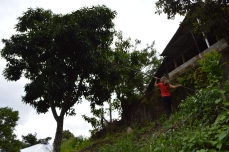 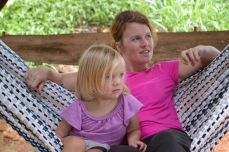 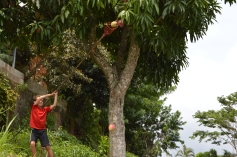 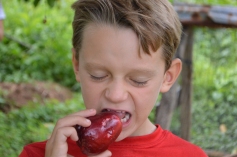 John showed us a tree in his yard and I tried to guess what it was.  I guessed some kind of fruit tree but I was wrong.  It was a loofah tree!  I always thought loofas were from the sea.  Now I know.

Who knew loofahs grow in trees?

One of our dreams is to own chickens one day for fresh eggs.  The kids loved hanging out with John and Jill’s chicks. 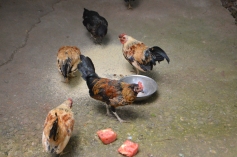 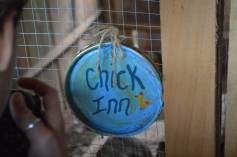 Lots more than this happened in our first week but too much to put in one post.  We are still getting acclimated to Atenas but absolutely love living in this little town in the mountains.  The scenery is breathtaking, the culture is rich, and the people here are beyond welcoming.  It really is Pura Vida.