–boat fixins that is — There are more projects that we will likely do (ie – adding watermaker and dodger) and likely additional things will break but hey, that just gives us more stuff to blog about —

So when we bought the boat and went through the survey, we identified the items that we wanted to fix before we moved aboard.  Over the last few months, we have checked things off the list and I’m excited to say that the boat as of today, January 2nd 2014, is in the slip ready for us to move in this weekend.  Here is a run down of the projects.

Prior to leaving Deltaville, VA and moving the boat to Fort Lauderdale.

Added Raymarine c120 chart plotter – Adagio had an existing chart plotter when we purchased her.   We wanted to add AIS functionality for added safety on the water.  Essentially an AIS helps prevents collisions by visually showing on a screen the position, course and speeds of other vessels.  For more details, click here.  The chart plotter that came with the boat had corroded inputs so we needed to replace it.  Fortunately, the yard where we bought the boat had one on a different boat that the new owner didn’t want so we got a gently used 6 month old plotter at a discount.

Replaced dump valves for the aft holding tanks – After lubricating all the through hull valves (12 of them),  2 of them would not close so they needed to be replaced.  Without replacing them, the holding tank would dump into the sea continually.  As you can imagine, that is bad on multiple different levels and neither the Coast Guard nor the average weekend boater would like that.  Per the US Coast Guard, you need to be at least 3 miles from shore to dump holding tanks into the ocean. 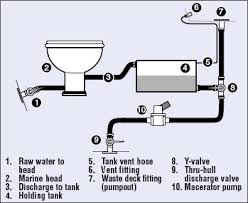 Changed oil on engine and on generator – In addition, we loaded up with additional filter valves, oil and other potential items that would need attention on the shakedown cruise.

Replaced 4 house batteries – See Jen’s post on the alternator issue that ultimately lead to replacing the batteries.  Here is the funny part is that — We bought 2 of them in Wilmington at the West Marine (only had 2 in stock) and were going to buy the other two in Charleston.   We ended up buying the wrong one so ended up just sailing 2 of the wrong batteries down to the next West Marine down the coast — and no, we didn’t charge West Marine a shipping charge 🙂

Replaced the VHF cable — After troubleshooting with the good folks at St Barts in Charleston and going up and down the mast multiple times, we simply replaced it because the range was low.

Hauled the boat out of the water to get all the work done.

Removed existing bottom paint and repainted along with removing the old name of the boat.  We decided to use Interlux Micron Extra.

Repaired existing bimini and sail stack pack.  Additionally, expanded the viewing window doubling the size to be better able to see the sails.

Mounted all fire extinguishers (7 of them) and had them re-inspected – re-certified.

Cleaned, resealed and added cover to the generator in the forward bow section of the boat.

Rewired some of the instrument panel and cleaned up the AIS functionality removing the splitter so that the VHF and AIS have their own independent breakers.

Tuned the rigging of the boat.

Sanded down and repainted chipped binnacles that hold the compass and wheel.

Replaced the name of the boat.

Added safety netting around the entire boat for the kids.

Ready to be re-launched in the water.

Re-launching into the water.

For the complete to do list, please see link

So the rule of thumb is that you should anticipate that 15% of the purchase price is needed to get the boat ready to cruise.  For us, we have come in under the budget and couldn’t have done it without the help of our broker Tom Harney.  He coordinated many of the different moving parts and provided so much sage wisdom and advice along with the 30 year local knowledge of the cheapest and best folks to use.

Below is Adagio in the slip in Fort Lauderdale where we will be for the next +/- 2 months before we leave the States.  She is ready for the family to move aboard.  As I sit here and type, I am excited as we are within 3 days of getting to the boat.  We are currently in St Pete Beach with my parents and my Aunt Joni and Uncle Tom.  We have one more set of relatives (Doug and Dinah – Jen’s Uncle and Aunt) in Cape Coral, Florida to say goodbye to.  All told, we have traveled almost 2,000 miles over the last 2 weeks and have seen nearly 40 friends and family – see Jen’s post on the journey .  More to come and the next blog will be written once we are to our new home!  Very excited and anxious at the same time.